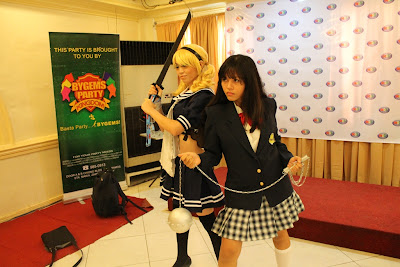 THIS IS IT! After how many weeks of being "dormant" (nah, I was just very busy with school work that I got no time for blogging) I shall be reborn and be an active blogger again. To start with my new blogging life, here is my report on the recent MCTV EVENT: The MCTV Movie Mania 2012!

As you can remember, I wrote an article on this event a few weeks ago. I was just going to witness the event and cover it for a post but an unexpected thing happened - and it turned out to be one awesome event for me.

Originally, I was supposed to go late, 4PM actually because of my duty, and just watch the awesome cosplayers do their thing. Then, something really AWESOME happened. I will tell you that on the second part. :p

So let's start with how I created my costume. :)
This is my Gogo Yubari Costume:

Let's break down the pieces of my costume.

So first is the coat and the inner white shirt. This was a recycle of my old costume. Remeber Yui Hirasawa?
So yeah, the navy blue blazer and the white shirt was similar to Gogo's uniform so I was pretty lucky. Having a tailor to make my blazer will cost a lot so it was a good thing that I had Yui's uniform. I printed out Gogo's seal to complete the blazer the upper part of the costume.

Next is the skirt. We were not able to find the fabric with the exact so we bought the closest one we can find.

Then the ribbon. I made it by my self. I had little knowledge in making bows so I hand-sewn my Gogo bow and attached it to a red ribbon to tie it around my neck. 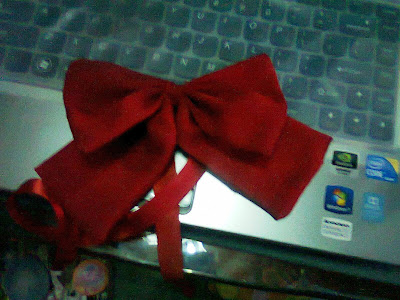 AND FINALLY the manriki! Or Gogo's weapon. Well, this was a challenge for me since I never ever (in my life) made a weapon and the manriki was a little bit difficult to make since it was a unique weapon.

This is what I wanted to achieve:

These were my raw materials: 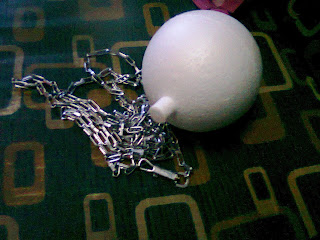 Two dog's leashes, clasped together and a styroball. I joined the ball and the chain together, and stuck out push pins as the spikes around it. My dad helped me with the handle - it was a PVC pipe and it was stuck on the other end of the chain. I painted it with white acrylic pain first before spray-painting it silver. This was done to prevent the ball from melting.

I lost count on how many coats I painted on the ball. But it was thick enough to protect it from melting.

And now the final product!! 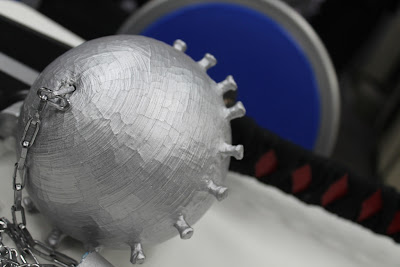 People kept on asking me where I got my weapon. I proudly said "I MADE IT!" And some where amazed. Phew, that made my heart fly. LOL.

For the shoes, I had a pair of white sneakers that was perfect for the cosplay. Yaay! Did not have to spend for it. I bought the white socks to complete the cosplay. I did not took a photo of it while I was trying it out so watch out for the photos of me wearing it on the day of the event. :)


~This ends the first part of my MCTV MOVIE MANIA 2012 report. I decided to cut it into three parts so that I can really write everything without turning one post into a novel. LOL.

~Thanks for reading and watch out for the second part VERY SOON.