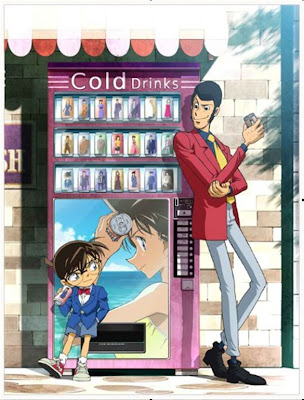 Lupin the Third versus Detective Conan is a crossover movie of two anime series, Detective Conan and Lupin III. Conan was tasked solve a mystery in a foreign country while Lupin was determined to rob the coronation crown of that same country.


I'm a big fan of the Detective Conan series. I love how Conan solve mysteries using his awesome deductive skills.
Lupin is part of my childhood. I have been watching this series, though not religiously, since I was a kid. His crazy antics made me laugh and his amazing wit and intelligence is really impressive, despite his 'lazy-ass' looks.

In contrast to the given title of the movie, Conan and Lupin did not go against each other. Rather, they worked together in a funny way to solve the mystery surrounding the royal family of Vespania.

Lupin's role reminded me so much of Kaito Kid's in one of the Detective Conan movies, The Last Wizard of the Century: Lupin helping Conan in solving the mystery by disguising as one of Conan's allies.


Maybe next time, they'll create a real Lupin versus Conan film (the two going against each other). I bet that would be awesome!