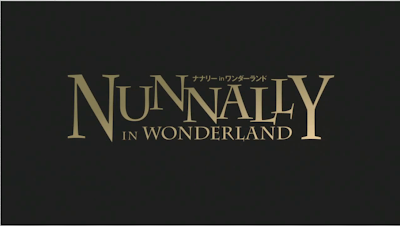 Missed Code Geass after that sad ending of the anime series? Well, I found the entire one-episode OVA on YouTube and decided to watch it from there. Here's the video:

The OVA is about Lelouch narrating a story to Nunnally about how she turned up in Wonderland and met the Code Geass main characters playing different roles from the original characters of Alice's Adventures in Wonderland by Lewis Carroll. The presentation of the video is similar to a visual novel game; it shows photos of the events with short motion pictures of important scenes.

I love the costumes of each character - A little bit original but still similar to Disney's Animated Movie of Alice In Wonderland. Nunnally as Alice wears a blue maid dress in the video, with additional lolita details like laces and ribbons.

Most of the time, Lelouch is the storyteller. He throws in a few side comments from time to time that made me conclude that he definitely has that sister complex. Quite adorable, don't you think?

The downer of this video is Lelouch's short appearance wearing a costume as one of the characters of the story. What character? Well, just watch the video. I can only say that his costume is very elaborate and very much suitable for his character. :)
at August 21, 2012