Visual Kei band in the Philippines 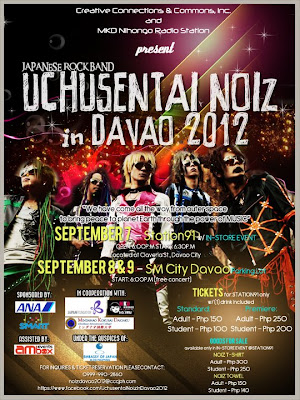 Uchusentai NOIZ, a visual kei rock band based in Japan, will hold a three-night concert in Davao on September 7, 8 and 9, 2012.
The said band will also be in Manila for a two-day concert in Best of Anime on September 15 and 16, 2012


The video shows a cover by Uchusentai Noiz of an original Filipino song, Narda by Kamikazee. Complete with colorful hairstyles and costumes, the band sang the song in their own style, which made it sound a little bit original.

For more information, visit the official facebook page of the event.
at August 11, 2012