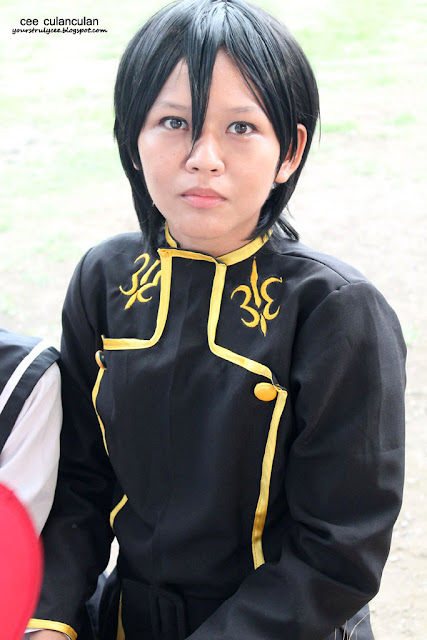 The long awaited post on that mini-event that I joined and won: CRIMSOLYMPICS COSPLAY COMPETITION during the Western Mindanao State University Palaro 2012 last September 5, 2012 . It was a fun event and I even won a special award for my portrayal of Lelouch Lamperouge.

I really had an awesome time during the event. It was fun cosplaying with my friends and meeting new ones as well.

(Photo credits: Lucille. Click on each of the photos to enlarge them.)

A photo with random people. It was nice of them to ask a photo of us with them. I felt like I was the real Lelouch that time! :)

After stopping by for photos, we went straight to the open stage for the competition. We were briefed by the organizers about the flow of the program and how to win the event.


Met up with Cristina at the event! She wuz zoo pretty cosplaying Elsie of The World God Only Knows

The contestants...
Anyway, after fooling around, the event started and here we introducing our characters.

We met a new friend during the event! Here's Jenaly as Haruhi of The Melancholy of Haruhi Suzumiya!


Jenaly was nice enough to mingle with us and pose for a few shots that day. She was so friendly! We got to talk to her and joke around with her a few minutes after we were introduced to each other.

Anyway, we were back onstage for the competition. I think this is the only in-character shot that we have.


Then there's the "fooling around" portion...
Get ready for a few fooling-around shots! This was taken DURING the event, when the host was still interviewing the other contestants. Okay so we did not care that there are A LOT of people looking at us while we did our "thing" on stage. LOL

The following photos are REALLY REALLY out-of-character. Be warned.
This is what happens when you leave Cee hungry. LOL.

ZANEC MEMBERS were there to support us!
The members of an otaku group that I belong went and supported us during the event. We thanked them by glomping each one of them. LOL.

Anyway, watch out for the part two (second day) of the cosplaying event! A few more photos and the awarding ceremony of this event!