Finally I can write about my Gakupo-Matryoshka cosplay during last week's Nursing Mini-Olympics opening. I was very busy last weekend with my hospital duty and the TV interview on cosplay that I totally forgot to write this! Good thing my friend reminded me of the photos from the opening parade and...

... here's what happened that day and the photos of my Gakupo Matryoshka!
Me and Myra dressed up before the opening parade. I chose to be Gakupo that afternoon. I forgot Myra's character! OERGOERDZZ I can only remember that her character is from an anime detective series. ><


Introducing Gakupo - Matryoshka!
I braided my Gakupo wig and wore a blue hoodiem a pair of loose trousers and my boots. This cosplay is still incomplete: the details on the hoodie are still missing and I wore black gloves as an alternative for the brown ones on the video.
Click here to view the video on youtube!

The booth and the parade...

Our club's booth! We actually cosplayed to promote our Japanese club, the Nihon Fure Ai Kai (A Touch of Japan). Our club is known for our POP THE BALLOON game, maid cafe, omikuji (Japanese fortune telling), Japanese Paper fish-scooping and of course, cosplay. :)


The parade was held just inside the campus, passing every college while cheering for our college year level. The awesome thing about our club is that we were the only one who had cosplayers. :) 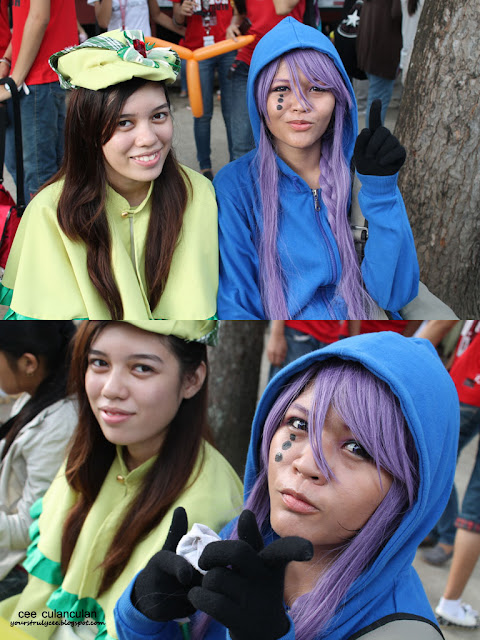 Short but tiring parade. I had beads of sweat on my forehead after the walk! We had a short photo-op after before changing. My dear friend Miku came along and took the following photos.

Thank you, dear Miku for taking these wonderful photos!

Another Gakupo cosplay done! Planning to cosplay other versions soon so watch out for it!
at September 01, 2012