Okay so after a few days of not blogging, I am back again. I am having problems with the Internet connection back home. The customer service agent of the company keeps on telling me that they are having the lines fixed since last week and they won't be able to tell me when the connection will become stable again.

I can't take the isolation! The place where I live is on alert level (my city is under siege, yeah I know it sounds  medieval but it's true), I can't go outside and do other things so I am stuck at home... It was terrifying. D:

Anyway, I'm at my cousin's house at the moment.. leeching their connection. Haha. So this post will only be quick as lightning. I can't stay long here.


So yeah, I just want to share how I won Ying Tze's (on of my favorite cosplay idols) giveaway!
YAAY!

She announced it on her facebook fan page that she will be giving away 8 sets of prints and coscards to lucky winners in celebration of her recent Facebook milestone: 8000 page likes ~!


I saw this on my news feed and tried to join in. I just typed in what I remember that day:

I joined the giveaway because I just want to let her know how a big fan I am of her works, this opportunity where she will read all of her fans' post (even the long ones) comes rarely so I just grabbed it!

Then five days later, I saw this update on my news feed:

This will be my first time in owning a cospalyer's print. I never really buy or collect some famous cosplayer's print. I rarely fan girl any cosplayer but when I do, I turn on my fanstalk mode. Haha! I research everything about this certain cosplayer I choose to idol and follow his/her accounts and or blog.

So yeah, maybe that explains why I don't own any print presently. And I am so happy that Ying Tze's prints will be the first ones that I will own.


I wish I can get back to my regular blogging days. I wish the connection will go back the way it used to be. D:

Anyway, thank you so much for reading!

Email ThisBlogThis!Share to TwitterShare to FacebookShare to Pinterest
Labels: CEEeveryday


Forgive my semi hiatus! My Fantasy Quest photos are all ready for the post but something happened in our city that made us evacuate from our home and postpone the report on that cosplay event. My mom and I are living with my granny's house and I just had a decent laptop to start blogging again.

Anyway, at least this post brings good news. Another giveaway hosted by yours truly together with other lovely bloggers. We present you Lucky 8 Lifestyle Giveaway.


One lucky winner gets to take home all these prizes worth at least PhP 4,000! 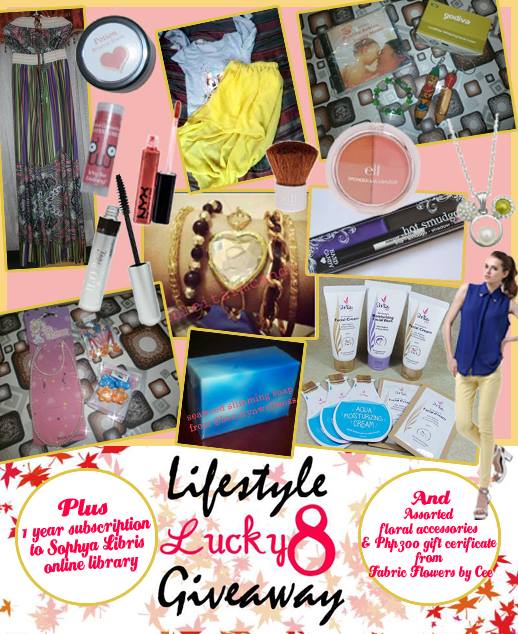 To join the giveaway, just follow the simple mechanics found on the rafflecopter app below:

***If a task on the Rafflecopter gadget is NOT APPLICABLE to you, PLEASE SKIP IT. If you would type anything such as "none", "n/a", etc. and submit it, the points allotted for that task would still be credited to you even though you did not do the task asked. This is one form of CHEATING, may it be intentional or not. So DO NOT TYPE ANYTHING ON THE VERIFICATION BOX AND SUBMIT IT if you do not have the account for the task or you did not/choose not to do it. We do these giveaways for our faithful readers and it would be unfair to those who really exerted the effort to do every single task to gain their rightful points. Thank you and Good luck!

This giveaway will end on October 14, 2013 and is open for Philippine Residents ONLY. If you are based abroad, you can still join as long as you have a Philippine address where we can mail the prizes. The winner will shoulder the shipping fee of the items.

That's it! Good luck on joining!

Email ThisBlogThis!Share to TwitterShare to FacebookShare to Pinterest
Labels: giveaway

And here it is, presenting my first out-of-town cosplay event: the Tournament of Champions (TORCH) SM NORTH EDSA!

Thanks to my very supportive parents, I was able to attend this event together with my brother and cousin. My mother accompanied me in traveling from our hometown to Metro Manila, particularly to Quezon City.

At the day of the event, I met up with my friend Alyssa who went as Nagisa of Free! I cosplayed Miku Hatsune from her Lots of Laugh music video. :)

As mentioned, the event was the Tournament of Champions (TORCH) Fourth Stage SM North EDSA Elimination Round. The winner of the contest will compete in the upcoming COSMANIA Event in October for the Grand Finals. The grand winner of TORCH Fourth Stage will be Philippines' representatives in Anime Festival Asia  AFA Singapore, one of the most popular cosplay event in the world. 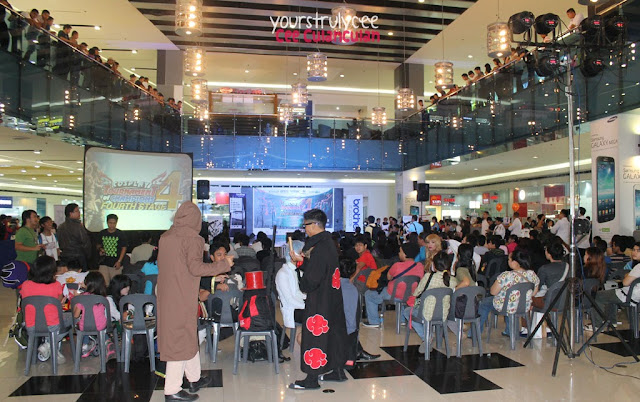 At the same time, it was International Cosplay Day and Cyberzone Cosplay Competition! It was a three-in-one event! ^_^

We declined the invitation of the organizers to join the competition, but we did join the parade around SM North Edsa together with other cosplayers before the start of the event. It was tiring but at least I was able to of tour the mall and see the stores there. The organizers and photographers took lots of photos and videos of the parade. I hope they post that soon! I was not able to take photos of the parade because we were eating all the while! LOL.


Got a very short video of the parade. 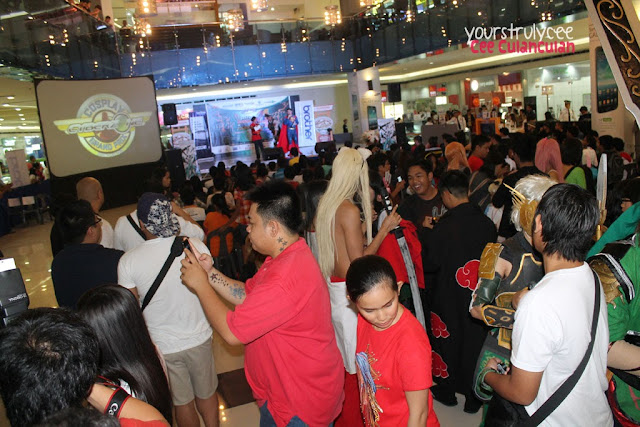 There were lots of people during the event. Cosplayers, photographers and con-goers flocked the event area to attend the activities. Of course we also took photos of the cosplayers present there with my otaku org banner, the NECo. We wanted to promote our new group out of town.

Anyway, we asked these cosplayers to hold up the banner while we take a photo: 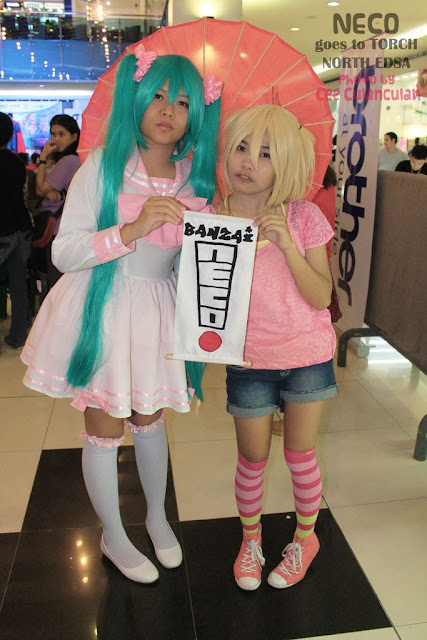 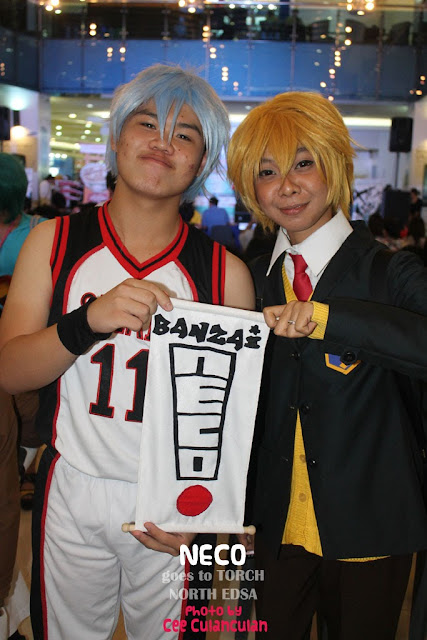 We asked other cosplayers to pose while holding the banner!

We obliged to photo ops by other cosplayers present during the event. Some of the cosplayers thought that Alyssa was cosplaying Len, a Vocaloid! Sorry, Nagisa-san!
We settled down after taking pictures to watch the cosplay competition. 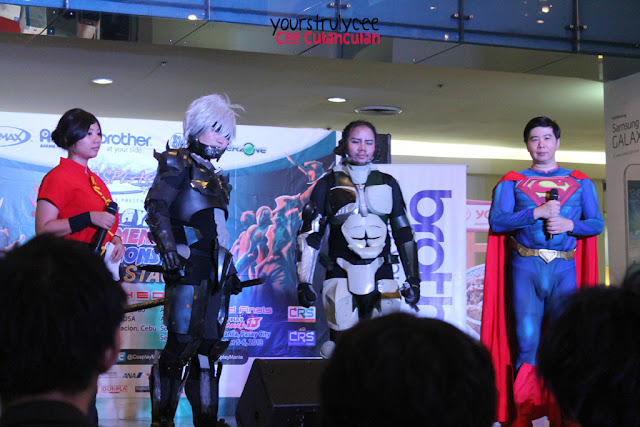 While we were watching the Tournament of Champions (which started after the Cyberzone Cosplay) I spotted a couple that I would never ever expect to see there.

IT'S JIN JOSON AND MIGUEL MERCADO!!

So we were like, HOW ARE WE GOING TO APPROACH THEM?! We got frozen to our seats, I got nervous and all because of this. Oh we are really big fans. :D

They sat there to watch the competing pair for the Tournament of Champions. After the performance on stage, the pair stood up and walked away. We tried to follow them but we lost them. D: Ack

After lurking for a few minutes backstage, JIN APPEARED from what it seemed like a dressing room. OMG Again our hearts went thumpity-thump as Aly and I pushed each other towards them.

So after moments of mustering our courage I asked Jin if I could we could get a photo with her! KYAAA!


SO YEAH! At last after stalking, lurking and pushing each other.. THIS IS IT! A photo with my cosplay idol! Behindinfinity herself! Oh goodness. I was not really expecting this to happen. I went to Metro Manila to get a chance to see her. And yaay!! It was pretty much worth it! Been watching her on dA and following all of her social net accounts (twitter, facebook, tumblr) for about three years! Actually, back then when I was explaining COSPLAY to my parents, her photos were my examples. Her journal posts inspired me to start cosplaying and blogging! So yeah, pretty much I am totally gay over Jin. Haha! Bear with me.


Hoho. I should get these photos printed and framed. First attempt cosplaying in Manila, I was able to see them. How lucky is that? :)

Anyway, after that uber gay moment, we thanked Jin (told her that we flew from Zambonga just to see her. lol) and waved goodbye. My only regret was I missed the chance of asking a coscard. Oh well. Maybe next time! ^_^

We also had our photos taken with the winners of the SM Cyberzone Cosplay competition:
What a day! Three events plus Jin and Miguel! Haha! I consider myself lucky that day. I was actually ready to go home! LOL But Fantasy Quest was next day so I can't pass that up! :3 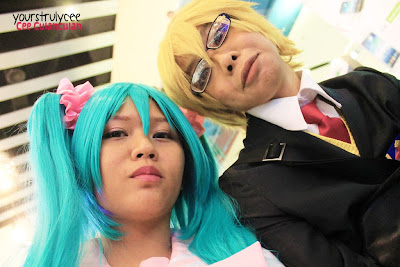 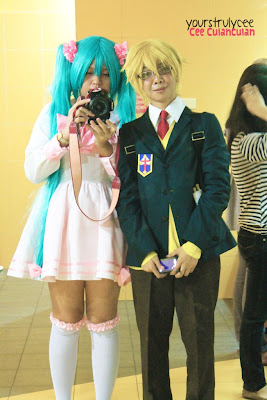 I should make a scrapbook of my cosplay adventures. LOL

Thank you for reading and watch out for my next post: FANTASY QUEST 3 LIVE ON!

It's been a long time since I had a collab blog giveaway. So after months from the previous blog giveaway, I give you DracoPrincess' 1st Blog Anniversary Gveaway with yours truly as one of the sponsors! 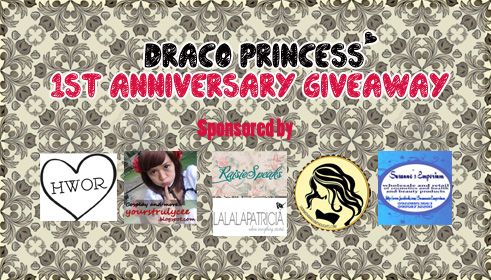 A blog giveaway together with
Pauchee, Raisie, Patricia, Angelique and Suzanne.

I sponsored the floral accessories there. These are the newest products available for made-to-order in my shop!

These are the detailed photos of the accessories included in the first prize package:
FIRST PRIZE

And this is the detailed photo of the accessories included in the second prize package:
SECOND PRIZE
To join the giveaway, follow the instructions on the Rafflecopter app below. This giveaway is only open to Philippine-based readers only.