I have been following Fantasy Quest since its first installment a few years back and I have been dreaming of attending it my whole cosplay life. I was like Rapunzel of Tangled back then, dreaming of seeing the 'floating lights' in person rather than viewing it from her window.
Back then, I can only view photos of the cosplayers who attended the said event, watch fancams from other cosplayers and hit the 'like' button of event photos taken by awesome photographers.

I got overwhelmed when I was actually in this event, the third installment of Fantasy Quest. It was like living in a real fantasy the moment I stepped inside the event place, Fernwood Gardens in Quezon City. Armed with my costume and props together with my companions, I ventured in the world that I barely know yet I thoroughly studied throughout the years. 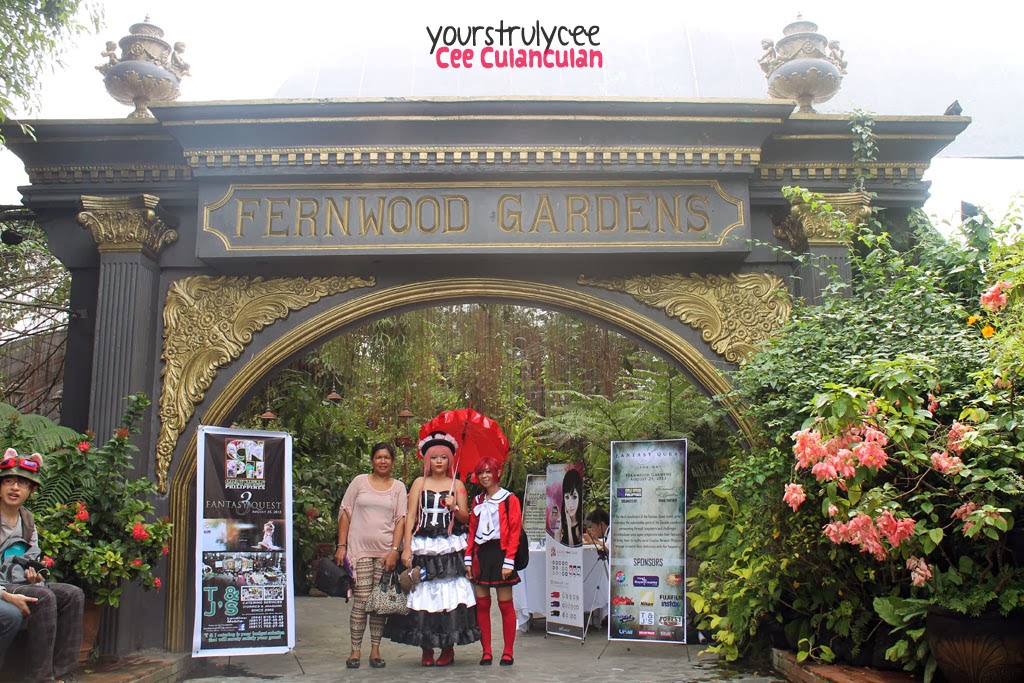 This trip was planned about 2012, while viewing photos of the recently concluded Fantasy Quest 2. (I don't live a luxurious life where I can swing to Metro Manila via plane back and forth whenever I want to. Trips like these with 'cosplay' as the purpose is a luxury to me and only my family can pay for it. I don't have a big allowance, you know. So I had to somewhat ask my parents to sponsor this trip so that I can attend this certain event.)

I raised the idea of going to Metro Manila to my mom, asking her to take me there to cosplay after I graduate and all. She actually said yes after reinforcing her this idea over and over again. The date was convenient for me (No more classes by August) so she booked the flight and all, making it a 4-day trip to MM. (Which gave me the chance to attend the TORCH SM North Edsa event the day before FQ)

Anyway, Fantasy Quest was like a big photo shoot event for photographers and cosplayers. The event site was not an ordinary convention hall but a very gorgeous place where they hold events like weddings and birthdays. Fernwood Gardanes was breathtaking - from  the gazebo and the iconic red telephone booth at the entrance to the fairy tale carriage inside it. It was a unique place to hold a cosplay con - and this fact made Fantasy Quest an event worth flying for. 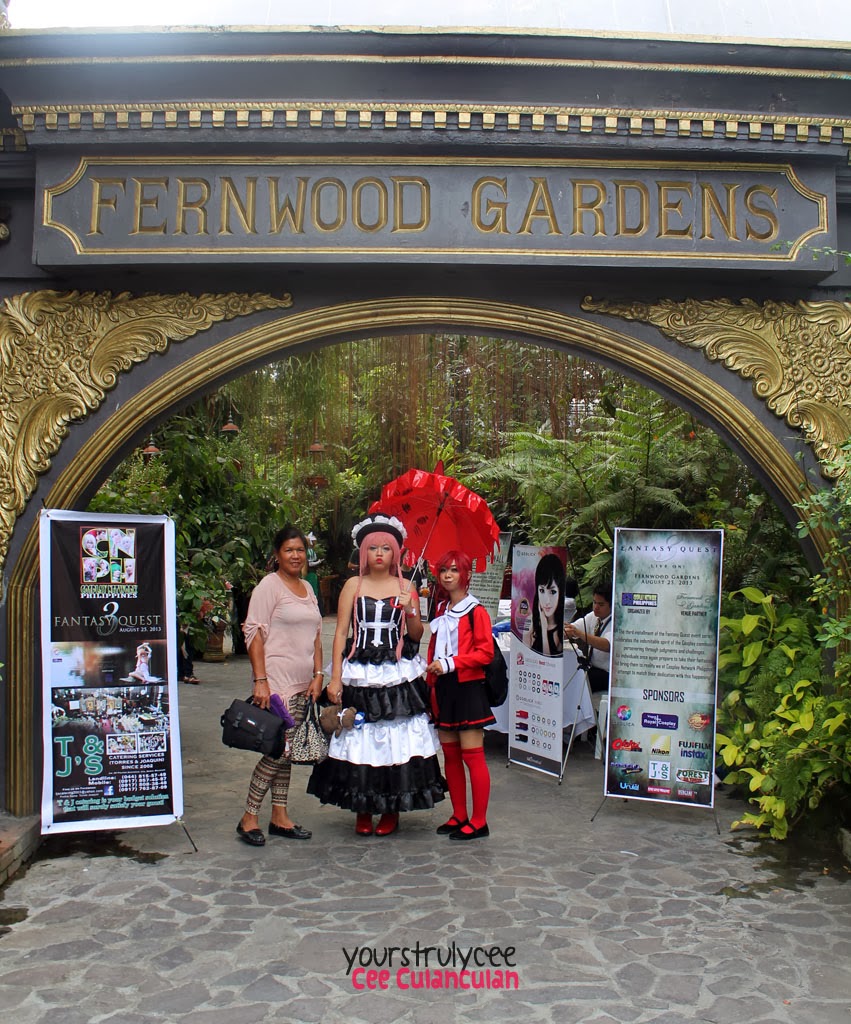 My mom was with me, with my brother and a friend, Alyssa. 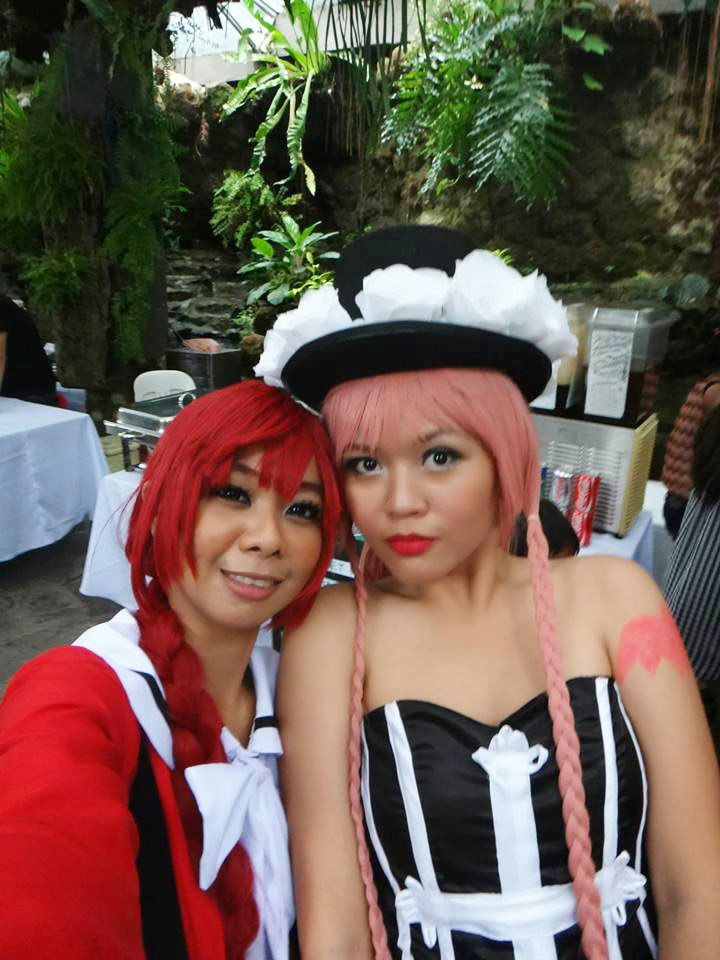 I went as Ghost Princess Perona and Aly as Hikaru Shidou of Magic Knight Rayearth. 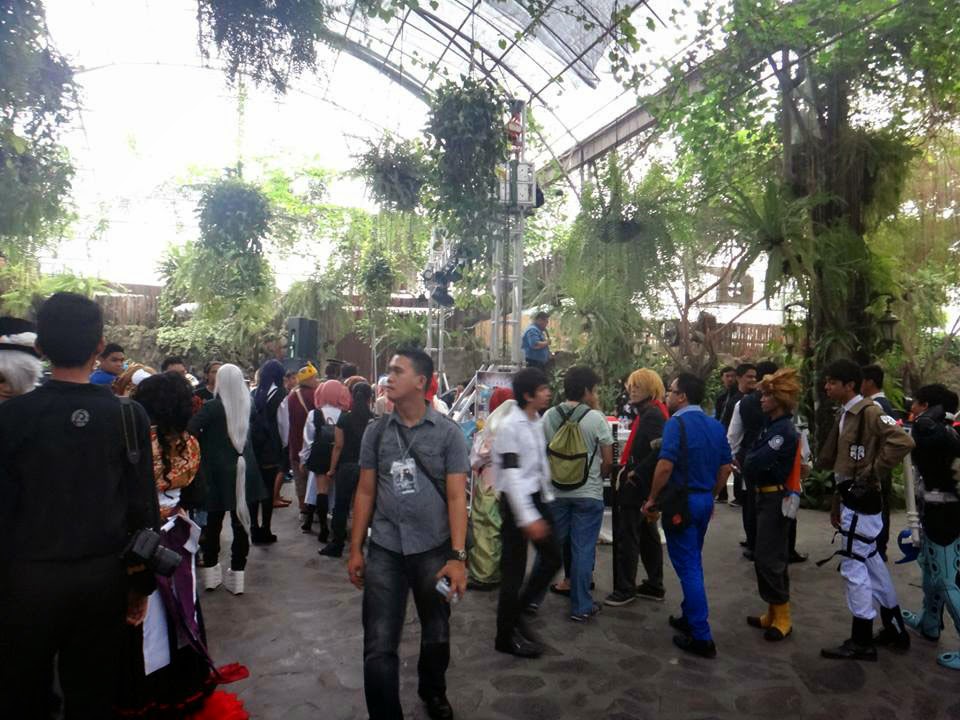 We did not know what to do first! We were both noobs when it comes to cosplay conventions. XD

After a moments of taking in the fact that we were actually there, we started approaching cosplayers to have our photos taken with them.

These were my favorite cosplayers during the event because of the following reasons.:

Because we kind of liked him so much, after a few hours we asked for a photo op again, this time on a different area in Fernwood. We asked my brother to take the photos so that me and Aly would be in it: 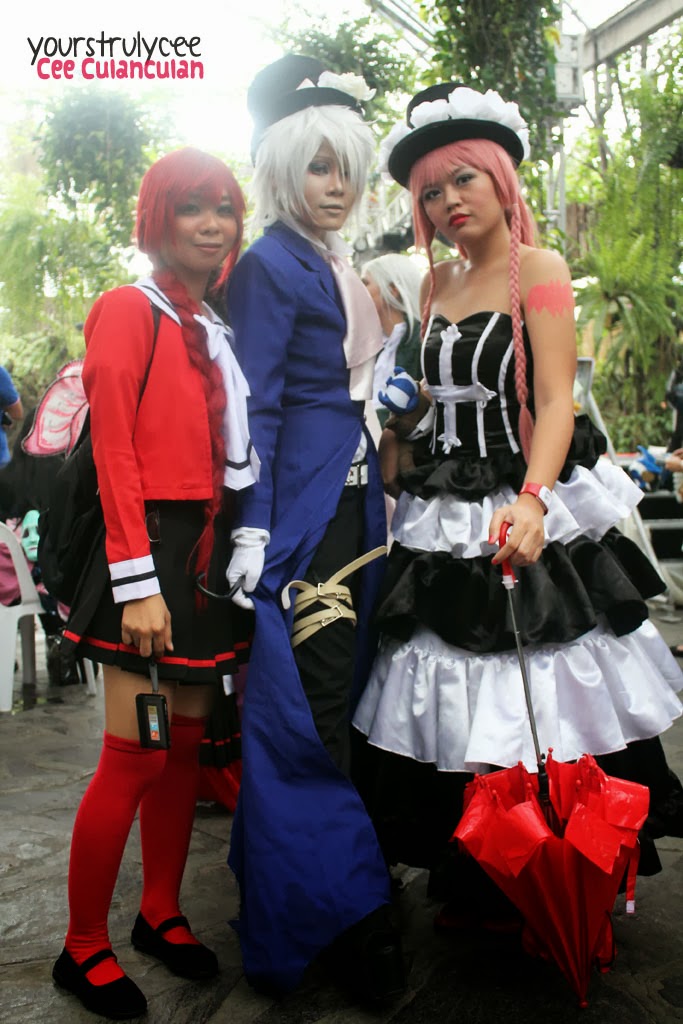 After lurking a for a few moments on that part of the place, we headed to the booths area where we found more wonderful cosplayers roaming around!


So we headed to the event area to witness the programs for that day.
During that time, the guests of that event were signing some materials for the fans. We discovered that the Yue that we saw at the booths area was one of the guests of the event!
How lucky we were able to have our photos taken with her!
(That's why she was rushing to the event area with a few event organizers, she was a VIP) 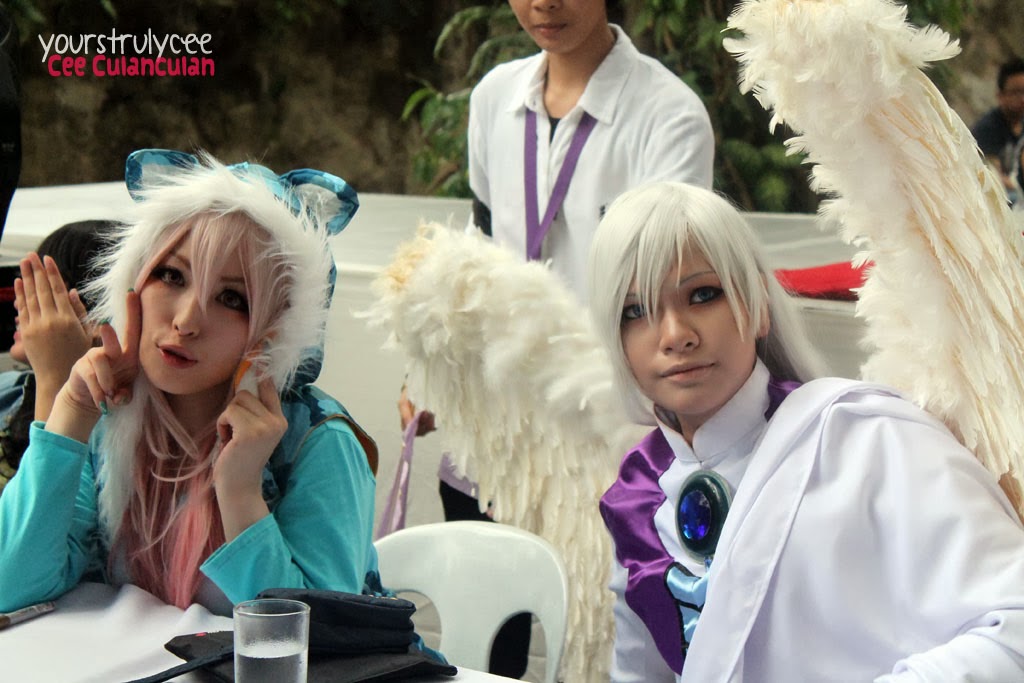 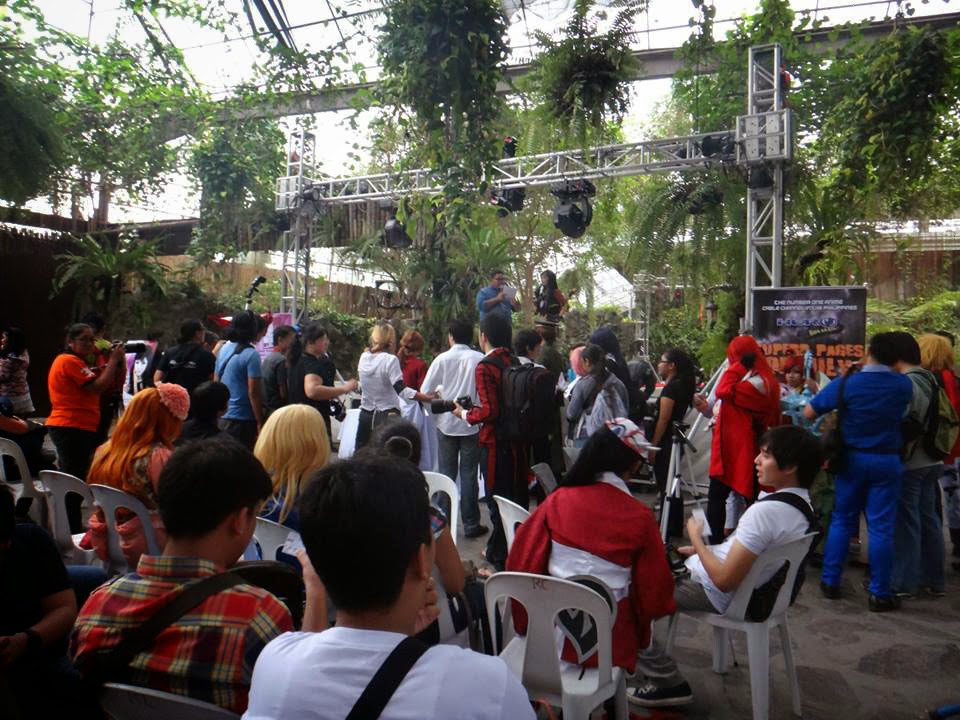 Well, the stage area was packed with cosplayers for the signing. Aly and I did not join in the line because we wanted to just sit down and observe the event. (We were tired too, after chasing cosplayers around! LOL)

After witnessing the cosplay catwalk and the on -tage games, we asked for a photo op from more cosplayers:

What I got during my cosplay trip:


Well the event was fun! We roamed around a bit more, took videos and finally headed to the changing room to transform into our normal selves. It was really nice cosplaying out-of-town for the first time! I was able to learn a lot of things while we were observing and roaming around the area. We kind of studied the makeup techniques common to cosplayers from Metro Manila, the quality and accuracy of their costumes worn by the cosplayers and we were able to compare the difference between a 'free entrance fee' cosplay event and an event that requires you to pay an admission ticket. (LOL I have a lot to talk about that last part!)

It was nice hanging out with Aly too! She was my guide during the TORCH event and this Fantasy Quest. I wish I can attend another event with her again (together with the other HaruSuika members. >_<)


That's it! Will post the videos taken during the event soon! I just need to edit it again. I lost my files because I had my laptop reformatted a few weeks ago (no I was not able to backup my files).

Thank you for reading~ 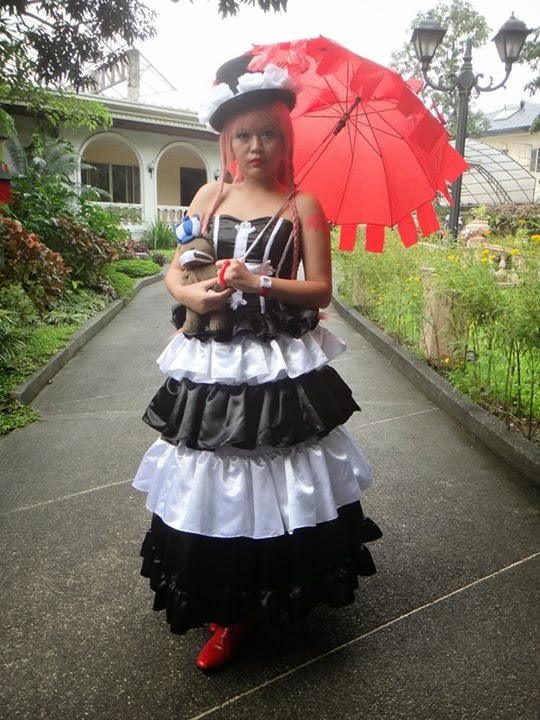