"I long ago developed a very practical smile, which I call my 'Noh Smile' because it resembles a Noh mask whose face features are frozen. Its advantage is that men can interpret it however they want..."
- Memoirs of a Geisha, Arthur Golden 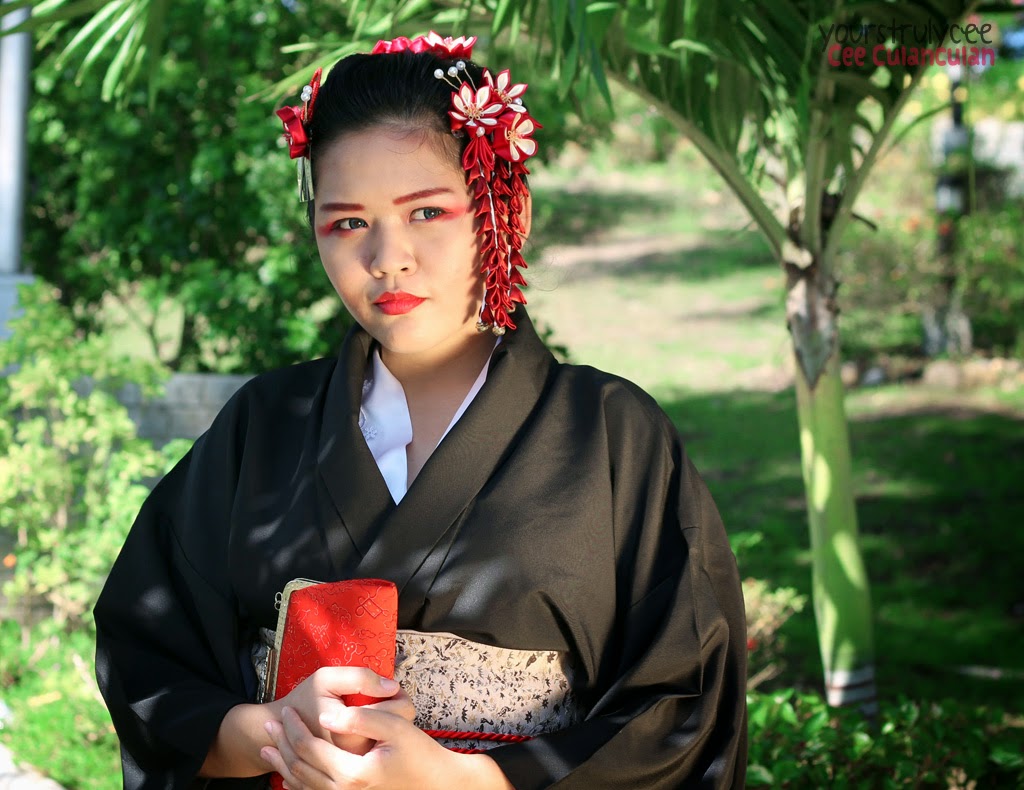 A few of my close friends know that I am a big geisha junkie. I love the novel by Golden and I can't count how many times I have watched the movie. >_<
I already watched a lot of Geisha documentary videos online in order to study their makeup, clothing, movements and accessories. I learned how to wear a kimono, tie an obi and do their makeup by watching these videos. I am not an expert on this though! I still feel like a novice when it comes to Geisha knowledge.

The entire set I wore that day was pieced together by yours truly. It was not bought as one from a store.

The first piece I acquired is the obi. My mom and I found this in a thrift shop and we did not know at first that it was an obi. My mom intended to chop it and turn it into a table runner! Luckily, I was reviewing kimono photos before that time and when I got a closer look on the piece, I recognized its size and length and identified it as an obi. 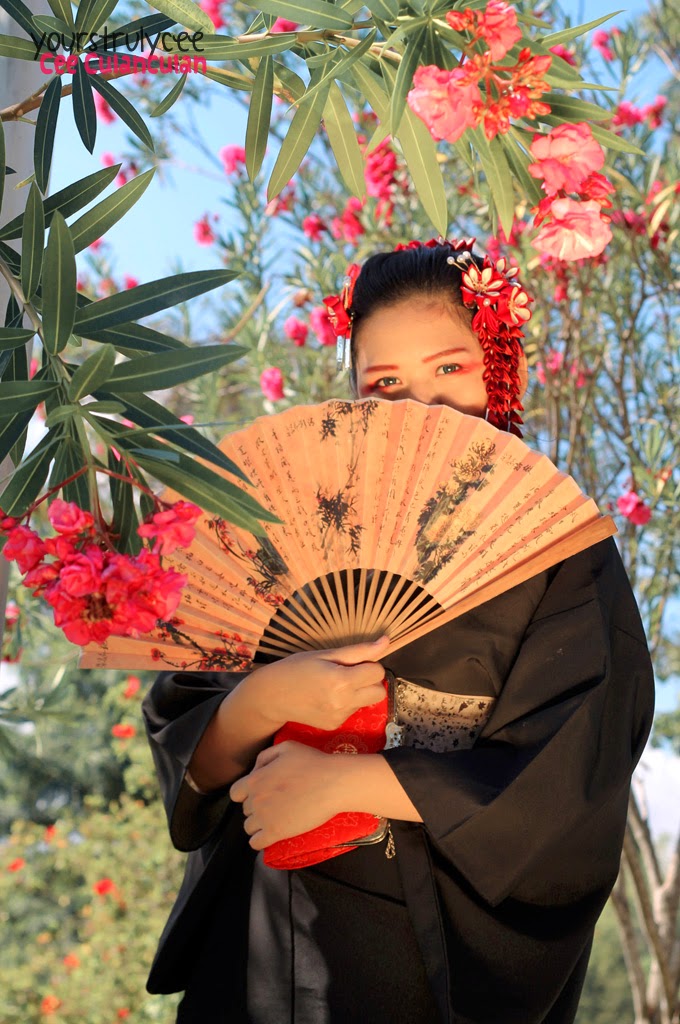 Because my friends planned to do a Harajuku shironuri shoot, I learned how to make the Kanzashi (Japanese hair ornaments for kimono and yukata outfit) and eventually I opened a shop selling my creations.
Designing these hair ornaments is the hard part for me. Sometimes I lack ideas on making an ornament pleasing to the eyes! That's why I view a lot of kanzashi photos online to get inspiration.
My kanzashi set that day was inspired by one of my client's  previous orders. I used the color combination of maroon and cream and made a complete set of kanzashi for a Maiko (apprentice geisha).
The set consist of a hana kazashi, kanzashi with bira-bira and kanzashi comb. 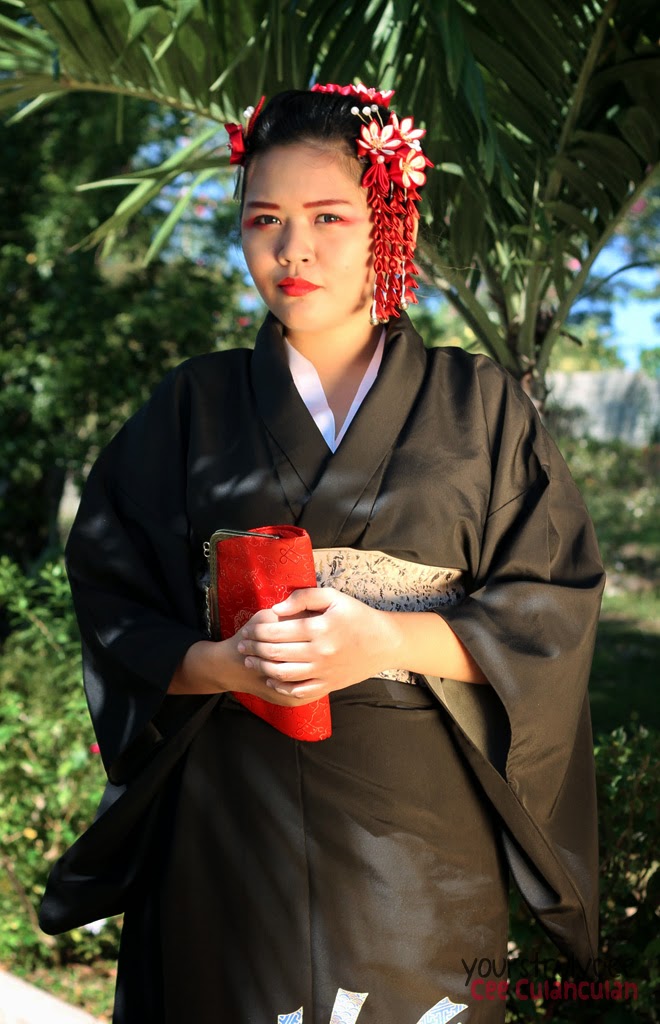 The purse that I used during the shoot was bought by my mom. She was shopping one afternoon when she saw it, and knowing that I have an upcoming Kimono shoot, she bought it for me to use as a prop. ^_^ 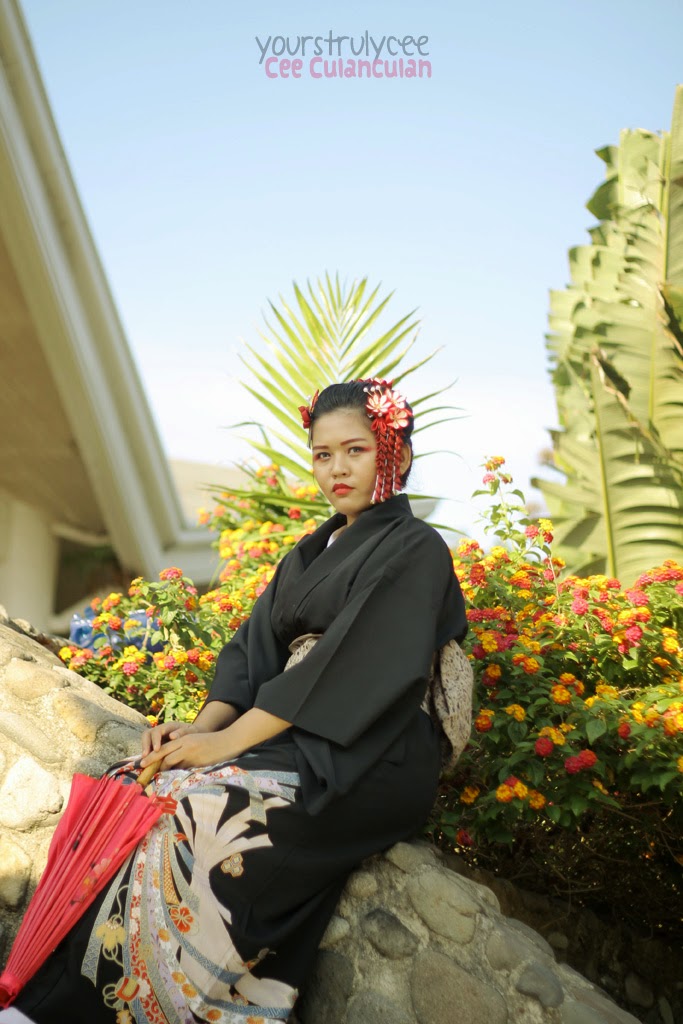 This is not an authentic geisha look for I have incorporated Maiko and Geiko/Geisha elements in my entire getup. My makeup and kimono are similar those of a Geiko's but I wore a Kanzashi set, just like a Maiko.
My obi belt was tied in a simple bow tie type. (I forgot the name of this type of tie >_<)

I wore blue lenses to copy Satsu's 'eyes like rain'. I don't have grey lenses so I chose the color closest to it. 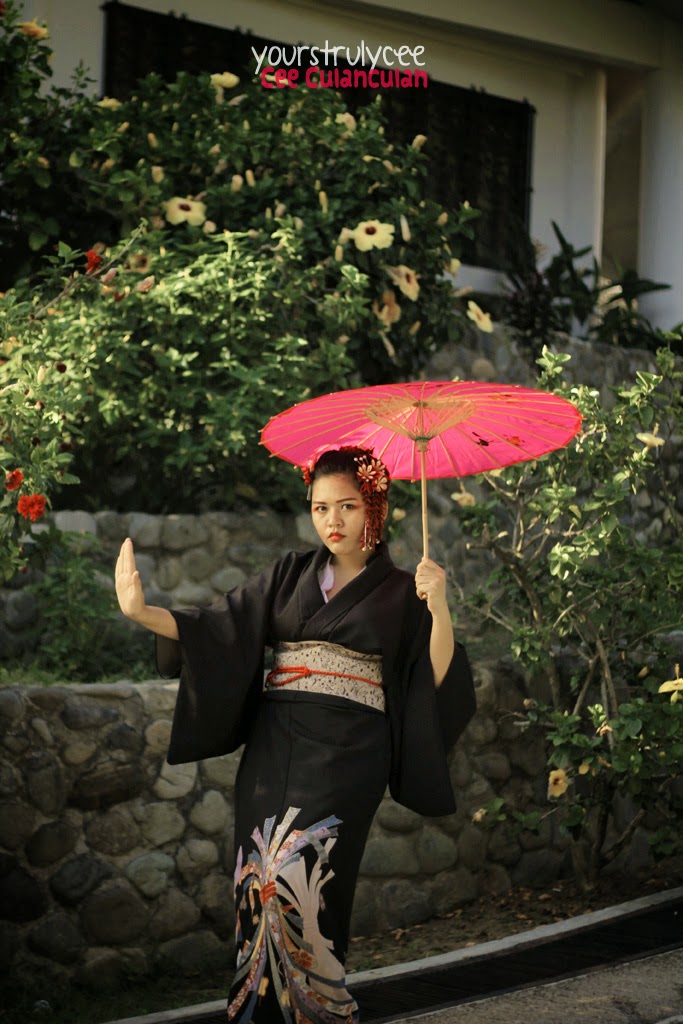 The geisha facial expression is really mysterious. Viewing a lot of Geisha and Maiko photos online helped me achieve a look closer to the real thing.
They give out looks that make you want to know more about them. That is the kind of feeling that I get whenever I see candid photos of Geisha and Maiko online.

I tried it out during the photo shoot and the result is for you to judge.

I still have a lot of improvements to do in this dress up. I will do better next time, if given the chance. Maybe throw in some Oiran elements to it. I love their elegance and magnificent style as well!

"Without its mysteries, it cannot survive..."
One cannot really imitate a Geisha for their world is one big mystery only a few can uncover.
But for some of us who are interested in their flower world, we can only but appreciate it in our own way. As a cosplayer, I show my appreciation to this mysterious profession by dressing up like them and throwing in some ideas to make it my own.

So this is not a geisha cosplay or dress up. Rather, this is my way of showing gratitude to the blooming flowers that beautifies the modern world.

Shoot organize by yours truly.
More photos here.
The entire shoot was handled by HaruSuika.
Photographers: Gin and Sheed
Assistants: Emina and Miro

Special thanks to PJ and Queen for showing their support that day.