The event was hosted mainly to choose Zamboanga Peninsula's representatives for the national qualifiers of the World Cosplay Summit Philippines.
Read all about WCS here.

The event had three main competitions. Here's a list of the winners for each of it:

Art Contest:
The art contest started from 10:00 AM and ended at 4:00PM.
The mechanics and criteria for this contest is as follows. Click on the image to enlarge it: 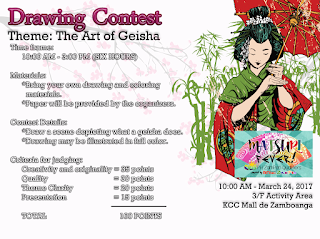 Solo/Walk In Cosplay Category:
The solo was merged with the walk-in category. This contest was limited only to the first 30 registered participants. Registration started from 10:00 AM. Despite having allotted 30 slots to participate on stage, some were able to manage to join beyond the cut off, reaching the final number of cosplayers to 36 participants.

Pair Cosplay Category (Main Event):
For the highlight of the event, a pair was chosen to represent Zamboanga Peninsula during the World Cosplay Summit Philippines Qualifiers. Winners of this event will be sent to Nagoya, Japan as the Philippine Representatives for the WCS. Two pairs competed with their skills in costume and props making as well as their ability to portray their character on stage.
These pairs followed the general guidelines throughout the whole competition.

The first part of the competition was the craftsmanship judging. The pairs were asked questions on how they came up with the idea on who to portray, how they made their costumes and props and why they chose these characters to compete with;

The first pair is TEAM SOS who portrayed characters from the game Dynasty Warriors: 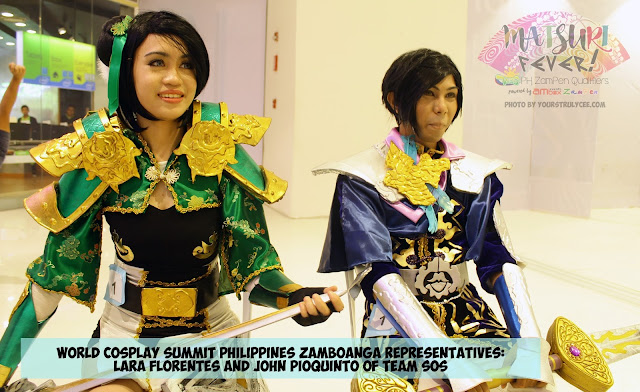 The second pair is ANIMAL XING who portrayed characters from another game Monster Hunter: 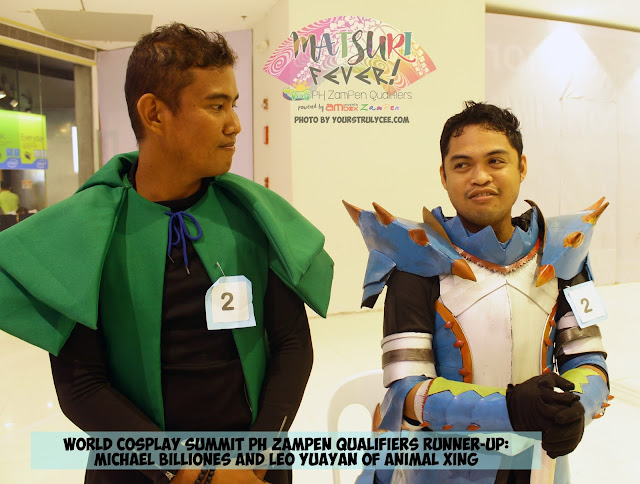 The winners and will advance to the WCS PH final round is TEAM SOS!
Lara Florentes and John Pioquinto

Here's a video of their entire performance and on-stage Q&A:

Congratulations to all of the winners and as well as the participants! I will write my own report on the event soon. Watch out for that!